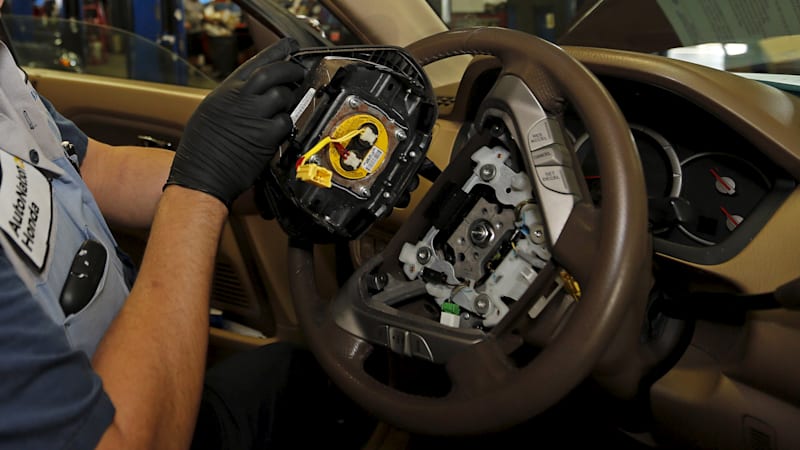 Not quite a decade ago, the potential for defective Takata air bags to explode in a crash erupted into the global auto industry’s most complex and far-reaching safety crisis in history. Roughly 100 million of them were recalled worldwide. But Ruy Drisaldi, a 42-year-old originally from Buenos Aires, Argentina, never learned of the risks until last December, when the air bag in his wife’s used Honda CR-V exploded after another car backed into hers near their home in the southeastern Mexican city of Merida, killing her.

Neither Drisaldi nor his wife, Janett Perez, an American citizen, had received a single warning about the recall, he says. “Someone needs to be held responsible,” he says. “You buy a car with air bags and assume you’re protected. I now realize all the years we had that car, we were driving with a gun pointed to our heads.”

Although the Takata callbacks have largely faded from the public eye in much of the world, Drisaldi’s story is a reminder that the defective parts continue to put drivers at risk. As of early July, more than 14 million still hadn’t been fixed in the U.S. alone, in addition to an unknown but likely substantial number in the rest of the world. That means that millions of car owners like Drisaldi—especially in countries with weak consumer protections—may remain unaware that the propellant used in their cars’ air bags could be degrading as a result of heat and humidity, turning their vehicles into potential explosion hazards.

At least 37 fatalities and 450 injuries allegedly linked to the defective parts worldwide have been reported to U.S. auto safety regulators. Of the deaths, 19 were in the U.S., while others have been reported from all corners of the globe, including in French Guiana, Nigeria, Brazil, Australia, and China.

Perez’s death, caused by a piece of metal that ruptured the bag and struck her neck, added Mexico to the fatalities list. The next day, a friend from Argentina sent Drisaldi a news clip about the exploding Takata air bag inflators and the worldwide recall that ultimately sent the company into bankruptcy. Honda later confirmed that the driver side air bag in Perez’s SUV exploded.

The incident in Mexico illustrates how auto safety recalls, even for deadly defects, can fly under the radar in parts of the world with weak regulatory regimes. In the U.S., the National Highway Traffic Safety Administration (NHTSA) has taken unprecedented steps to not only oversee but also coordinate the industry’s campaign to replace the tens of millions of inflators. An independent monitor also prodded companies into adopting more effective outreach techniques beyond what’s required by law. Nothing similar is going on in Mexico, where companies say there’s not even an effective registration system through which they can locate owners of used cars.

“While the U.S. recall system is flawed, in other countries we see systems that are virtually nonexistent,” says Sean Kane, president of Safety Research and Strategies Inc., a consultant and advocacy organization in Rehoboth, Mass.

The death of a driver of a Honda Accord in April is the latest Takata-linked fatality in the U.S. Since then, Honda said it had made more than 100 attempts to reach owners of that particular vehicle through calls, emails, mailed letters and even in-person visits. But in Mexico, companies have mainly used broad outreach campaigns through ads placed in newspapers and notices on websites.

Merida, where Perez was killed, is well-known for heat and humidity. Those are factors investigators have said cause the air bags’ ammonium nitrate propellant to become unstable and prone to ignite with too much force in an accident, shattering the metal inflator canister. Many of the potentially deadly inflators were manufactured at Takata’s plant in Monclova, Mexico, and were exposed to uncontrolled moisture conditions, according to a NHTSA report.

Frank Melton, a lawyer for Perez’s family, says her death “could have been prevented had the same recall efforts used in the U.S. been implemented in Mexico.” Perez was born in Los Angeles, and because of her U.S. citizenship, her family was able to file a claim with the Takata victims’ fund in the U.S. But Mexican citizens who’ve been injured by Takata bags there have no such recourse.

Honda has repaired about 72% of its affected cars in Mexico, compared with 89% in the U.S. That means it has yet to fix almost 114,000 vehicles in Mexico. Toyota’s 41% rate there means almost 144,000 owners may be driving unaware of the potentially deadly air bags. General Motors says it’s repaired just 36% of its vehicles with recalled Takata bags in Mexico, leaving 213,000 such vehicles with potential problems.

Nissan and Mitsubishi declined to share information on repaired cars but said they’re working to reach customers. Ford and Toyota didn’t reply to requests for comment.

Honda defended its outreach efforts in Mexico, saying it’s tried to increase awareness and track down owners of recalled vehicles. “We proactively do everything within our reach to find the owners of vehicles that have been recalled,” says spokesman Fernando Maqueo.

As cars change hands to second, third and even fourth owners, it gets harder for carmakers to locate them, says Chris Martin, regulatory and legal communications manager at Honda in the U.S.

Automakers in the U.S. are required to alert drivers about recalls using mailed notices and rely on state vehicle-registration systems for addresses. For the Takata recalls, most automakers have used multiple sources of driver information that are updated more frequently than state systems, such as insurers and repair-shop data. They’ve also used e-mail, postcards, certified mail, and targeted social media ads, according to a January report by the NHTSA-appointed monitor overseeing the campaign.

“We’ve gone to really unprecedented extents in the U.S. to repair these, using lots of different outreach mechanisms including even knocking on doors,” Martin says. In Mexico, there is no equivalent vehicle registry, Maqueo says.

Mexico’s consumer protection agency, Profeco, pointed Bloomberg News to a recall alert on its website and didn’t respond to additional questions on the disparity between efforts to reach car owners there and in the U.S.

Perez’s death is the only one tied to a faulty Takata air bag in Mexico, Honda says. Experts say there’s no global database or investigative process used by authorities to know whether that’s true.

“Cases are tied to these failures only when companies acknowledge the problem,” says Alejandro Furas, head of the New Car Assessment Program for Latin America and the Caribbean. The nonprofit has been lobbying governments in the region to upgrade safety rules. “We’re regrettably in the hands of the industry. The companies know this and take advantage of it.” (Among the program’s donors is Bloomberg Philanthropies, a nonprofit headed by Michael Bloomberg, owner of Bloomberg Businessweek parent Bloomberg LP.)

Honda’s Martin acknowledges that other Takata-related deaths could have gone unreported in parts of the world where the problem isn’t well-known or that lack the same regulatory and safety infrastructure that exists in the U.S. “If somebody doesn’t tell us or a government official about it, there’s no way to be sure,” he says. “People picking up the pieces after a crash may not know what they’re looking at.

Indeed, Kevin Fitzgerald, a former Takata propellant engineer who resigned in 2014 and cooperated with the U.S. government’s investigation of the supplier, says he’s skeptical that only one injury and one fatality have occurred in Mexico. “That’s awful hard to believe,” he says. “I just cannot wrap my head around that.”

Furas says Mexico—and Latin America as a whole—needs governments to get ahead of these problems by setting up vehicle certification systems. But that’s no easy task. “The truth is Latin American governments don’t like these kinds of regulations,” he says. “They require investments.”