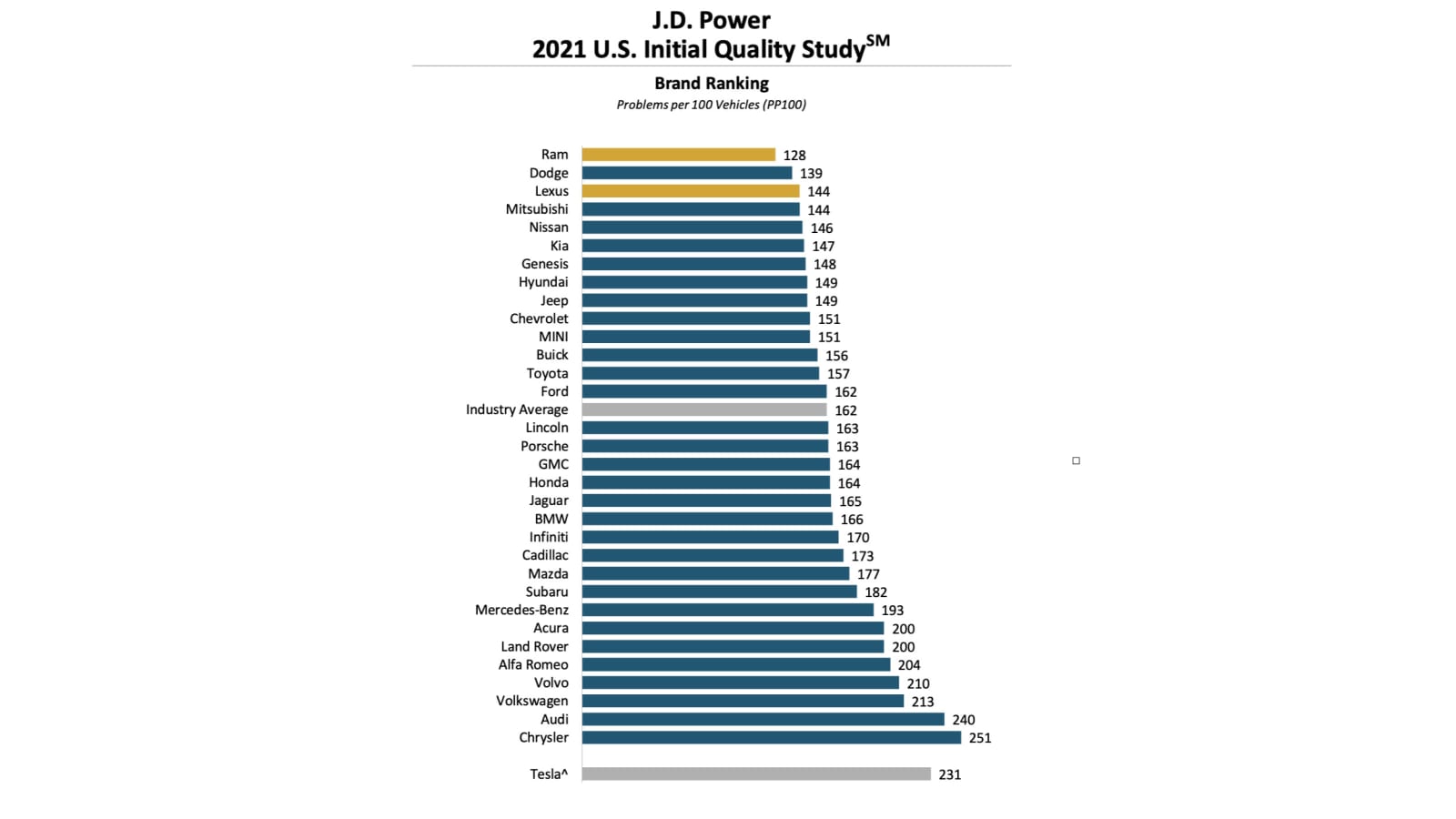 For the first time ever, Ram leads in J.D. Power’s annual Initial Quality Study with a score of 128 PP100, or problems experienced per 100 vehicles in the first 90 days of ownership. Ram was in third place in last year’s rankings. Coming in second place is Dodge (139 PP100), a sister division to Ram under the Stellantis umbrella, followed by Lexus (144 PP100), this year’s highest-ranked premium automaker, in third. These findings reinforce an overall trend over the last few decades where mass-market brands have outperformed premium brands that tend to introduce bleeding-edge technologies that can confuse owners or fail to work entirely. Genesis (148 PP100) is the only other premium automaker to perform better than average.

At the bottom of the official rankings is Chrysler (251 PP100), which seems to make little sense considering most of its technologies are shared with Dodge and many with Ram until you consider that Chrysler only offers two platforms and one of them is the Pacifica/Voyager minivan twins that are unique to the brand. The next worst are Audi (240 PP100) and Volkswagen (213 PP100). Tesla would fall in between VW and Audi with its score of 231PP100, but because the electric car manufacturer doesn’t provide access to J.D. Power in every state, it’s not officially included. Interestingly, J.D. Power said on a followup call that the problems that Tesla owners report most often are more traditional issues, such as panel fitment, interior noises or paint problems instead of problems with the car’s electronics.

According to J.D. Power, the industry averaged a score of 162 PP100. That is four points higher than the overall score in 2020, and 20 of 32 brands improved their quality scores over the last year. That’s a two percent increase in quality in 2021, which is good but slightly lower than the average rate of improvement over the last decade. On a car-by-car basis, the Nissan Maxima leads the overall field with a score of 85 PP100.

Issues with infotainment systems — and in particular problems pairing smartphones with in-car technologies — continue to be the top-reported problems. Headaches connecting Apple CarPlay and Android Auto dominate the complaints. “Owners want wireless connectivity, and the industry has responded,” according to Dave Sargent, vice president of automotive quality at J.D. Power. “However, this has created a bigger technical challenge for both automakers and tech companies. Automakers generally are the ones facing the wrath of owners, but this is definitely a shared problem. Owners don’t care who’s at fault — they just want their phone and their vehicle to talk to each other.”

While problems with in-car technologies and smartphone integration are legitimate complaints, it’s good to remember that new cars today are overall quite reliable and unlikely to leave their owners stranded on the side of the road. It’s also worth noting that automakers will need to work closely with technology companies like Apple and Google in order to continue refining their software and therefore improving their quality rankings from J.D. Power.