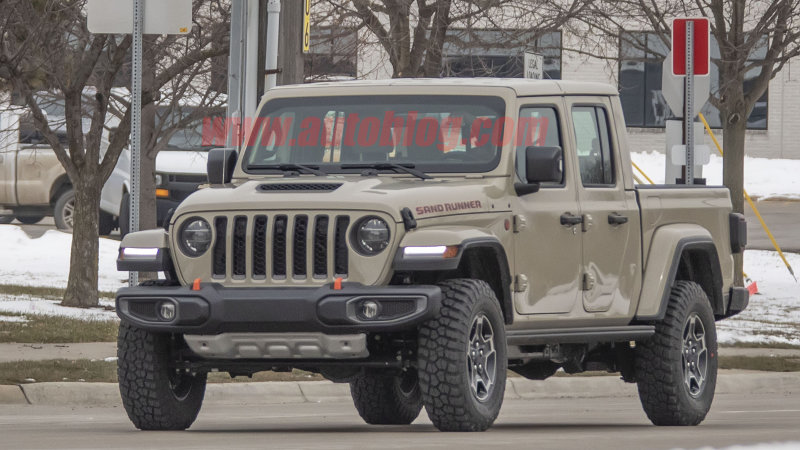 We learned this week that some of the new-car exuberance has dimmed a bit for the Jeep Gladiator, which is now being offered with up to $9,000 in incentives to offset the high prices that have meant lackluster sales. Jeep also seems eager to diversify its packaging, to create the right Gladiator for everybody. Last week at the Chicago Auto Show we met the leather-lined Gladiator High Altitude, along with the Gladiator Mojave, a doors-off, roof-gone, high-speed competitor to the Ford F-150 Raptor. Now our spy photographer has spotted a similarly kitted Gladiator called the Sand Runner.

They have lots of sand in the Mojave, so what’s the difference, if any, between these rigs? The Sand Runner seems to have the same Fox remote-reservoir shocks as the Mojave — we can only assume they share the Mojave’s settings, which are stiffer than other Gladiators. Both have a hood scoop. One small difference: The Mojave rolled onto the Chicago show floor with 33-inch Falken Wildpeak A/T all-terrain tires, and our shooter says the Sand Runner seems to be shod in Goodrich Mud-Terrain T/As, though he could not detect the size. The wheels are also different than those offered on other Gladiators.

Most intriguing, while the Mojave wears a new “Desert Rated” badge, the Sand Runner has Jeep’s traditional “Trail Rated” designation. Jeep says “Desert Rated” denotes a vehicle that meets the company’s special criteria for fast desert driving, including a test on a new desert section of Jeep’s proving grounds, and “Trail Rated” only applies to vehicles that meet the criteria for low-speed off-road driving. (You’d think Sand Runner would be the faster of the two, but we digress.)

Otherwise, the Sand Runner is done up in Gobi clearcoat with body-color fenders and roof just like the Chicago Mojave, and they share other visual cues right down to the orange tow hooks. Our spy shooter didn’t get a look inside.

Perhaps the Gladiator Sand Runner is a desert setup that’s slightly less capable than the Mojave? And perhaps slightly less expensive, since we now know Gladiator pricing is a pain point with consumers? Whatever it is, since it’s not wearing the slightest shred of camo, we’ll likely learn more soon.