Ferrari Competizione A has a Targa top and revs to 9,500 rpm

Ferrari Competizione A has a Targa top and revs to 9,500 rpm 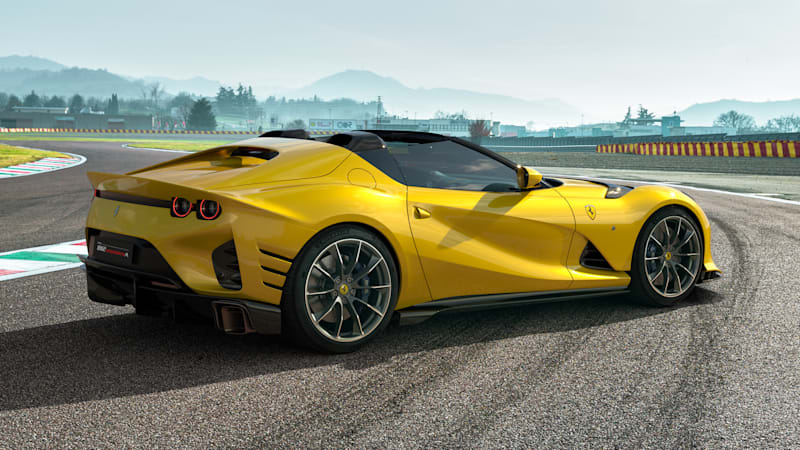 Aside from the missing roof, the Competizione A is fundamentally the same car as the Competizione. Losing the roof is more impactful in this particular circumstance than others, though, on account of Ferrari designing such a distinctive and aero-focused roof for the standard Competizione. The coupe uses a massive aluminum cover where you’d expect the rear window to be, and it’s littered with vortex generators to create additional downforce.

This design wasn’t possible with the Competizione A, but Ferrari says it found a solution. The A compensates with a new bridge element between the flying buttresses that is designed to direct air toward the rear spoiler. This design is “essentially restoring the downforce to the same level as the 812 Competizione,” Ferrari claims. In addition to directing air, the bridge is also designed to reduce drag.

The all-important Ferrari V12 carries over from the regular Competizione to the A. The 6.5-liter V12 is making a whopping 818 horsepower and 510 pound-feet of torque in this latest version of the engine. It revs all the way to 9,500 rpm. The 0-62 mph time is quoted at 2.85 seconds, and top speed at 211 mph — both of those are for the coupe, because Ferrari hasn’t provided those specs for the Targa top A yet.

There are endless internal engine changes between this new V12 and the one in the standard 812 Superfast, but the most intriguing is a new “diamond-like carbon” coating applied to the piston pins and the steel-sliding finger followers on the cams. Ferrari says this tech is derived from its F1 cars, and was specifically designed to allow for a higher lift profile.

From here, just go down the line of performance specs and figures. Everything about the Competizione and A are just a bit better than a regular 812. Ferrari’s seven-speed dual-clutch transmission is revised for 5% quicker shifts than the regular 812. A new brake design reduces heat to the brake system by 30%. The car is 84 pounds lighter than a standard 812. Its impressive and complex aero system amounts to significantly more downforce. And for the A, Ferrari developed a flap in the windshield header that creates a bubble of air for the cockpit to influence disturbing airflow away from the passengers. Plus, the Targa top itself is made of carbon fiber. The list goes on, with a new all-wheel steering system, revised Side Slip Control, a nicer cockpit … you get the idea. Unfortunately, chances are high that if you don’t already have an allocation, you won’t ever get to experience these improvements.

Ferrari makes no mention of these cars going on sale or being made available to folks, but it does suggest that they might be very difficult to get your hands on. “This duo of cars is dedicated to a very exclusive group of collectors and enthusiasts of the most noble of Ferrari traditions,” the press release reads. Are you a noble Ferrari owner? If not, it sounds like this car may not be built for you. At any rate, there’s always the used market, which is bound to be mega expensive.