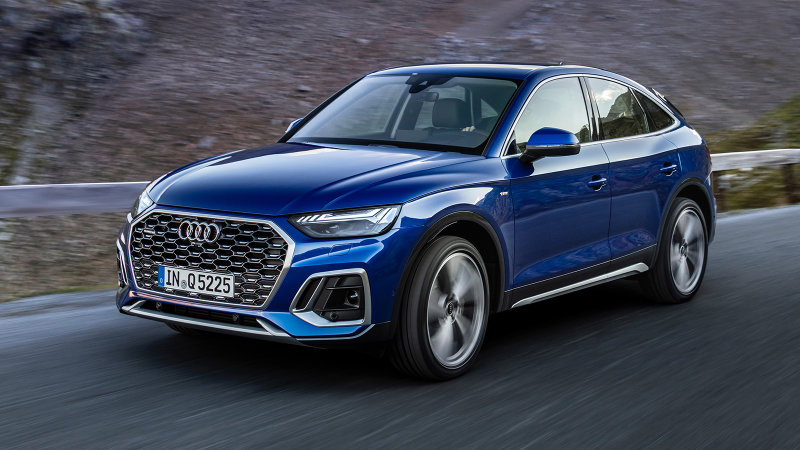 Audi is continuing to follow the fastback crossover trend with its latest example, the 2022 Audi Q5 Sportback. It’s based on the recently refreshed conventional Q5 shown back in June. As such, the Q5 Sportback is pretty much the same crossover, but with body changes and some equipment differences.

Unsurprisingly, the regular Q5 and Sportback are pretty much identical from the nose to A-pillars. From there, the roofline of the Sportback starts arcing down toward the tail and the beltline. The section of hatchback below the window gets a little integrated spoiler design echoing Audi’s sedans and car-based Sportback models. The rear bumper gets a unique design with more geometric and angular trimmings. Overall, the Q5 Sportback is actually 0.3 inch longer than the regular version, and it’s more aerodynamic with a 0.30 coefficient of drag. The Q5 Sportback is also one of the latest Audis to receive OLED taillights, which are available in three different designs. They change their illumination pattern when switching to the sportier “Dynamic” drive mode, too.

As with its normal twin, the Q5 Sportback interior design is generally carry-over from the previous, regular Q5. The big change is the addition of a 10.1-inch touch-sensitive infotainment screen with the latest Audi operating system and without the old MMI center console controls. The cabin also gets configurable ambient lighting and can be equipped with the 12.3-inch Virtual Cockpit instrument panel, too. The Sportback shape does reduce cargo space. With the rear seats up, there’s 18 cubic feet of cargo space compared to the regular Q5’s 25.1. That’s a significant drop and an amount that’s comparable to subcompact crossovers. It’s pretty similar to Audi’s Q3. With the seats down, cargo space is closer at 52.3 cubic feet in the Sportback to the 53.1 in the standard Q5. Those rear seats are also available with sliding and reclining functions.

The Q5 Sportback’s powertrains are shared with the regular model, too. The base Q5 will come with a turbocharged 2.0-liter four-cylinder with mild-hybrid assist making 261 horsepower and 273 pound-feet of torque. It’s paired to a seven-speed DCT automatic and all-wheel drive. The SQ5 will get a turbocharged 3.0-liter V6 making 349 horsepower and 369 pound-feet of torque. This model also gets all-wheel drive, but an eight-speed traditional automatic. Although a plug-in hybrid powertrain is available on the regular Q5, there are no plans to offer it with the Sportback. The Q5 Sportback also comes standard with the sport suspension that’s an option on the regular model. Electronically adjustable shocks and an air suspension are other options.