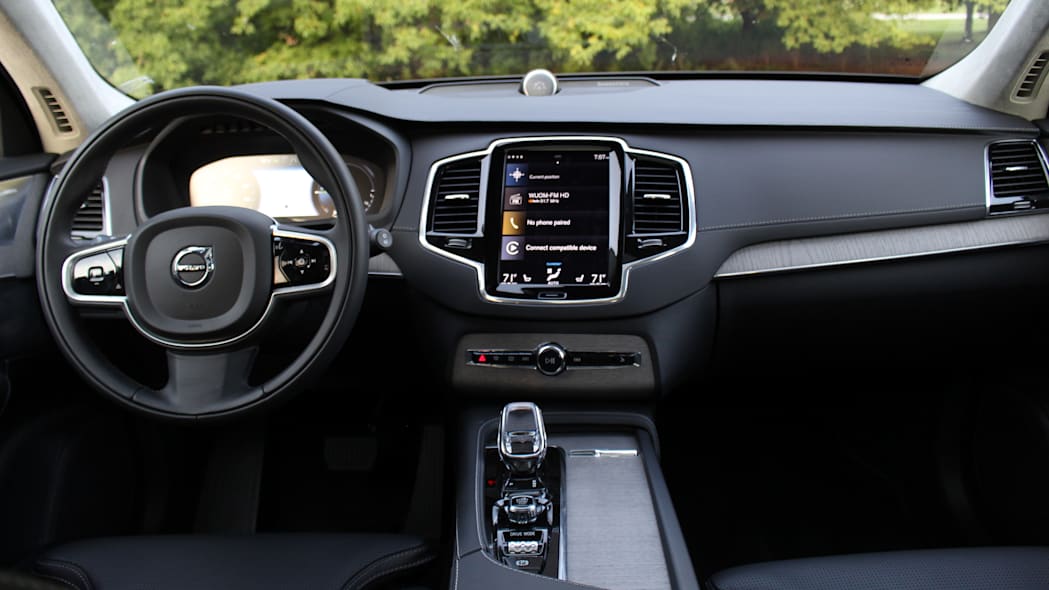 The 2021 Volvo XC90 is the biggest vehicle in Volvo’s lineup, serving up three rows of Swedish luxury. It’s an attractive crossover that’s instantly recognizable as a Volvo, serving as the flagship that led the brand’s revival a few years back. Volvo offers choices galore with the XC90, whether that be through trim levels or powertrain options. None of them are distinct performance models in the vein of the BMW X5 M or the Mercedes-AMG GLE 63, but the XC90’s appeal isn’t held in 0-60 mph times and freakish handling.

Instead, Volvo focuses on what it does best: Safety, efficiency and classic styling that makes us swoon. It’s spacious and cosseting when fully decked out. And while the price can rise quickly, Volvo has entry-level versions that are attainable and priced below the competition. Despite this generation starting to age, Volvo keeps it updated enough to conceal its graying areas. Those looking for something shiny and flashy should look elsewhere, because even if the snappy tech and diverse powertrain lineup are intriguing, the XC90 still flies under the radar. It’s the luxury crossover for a family that doesn’t wish to boast about its bank account, but still wants a taste of the finer things in life. There’s even a plug-in hybrid version for those wanting something that’s both quick and efficient.

Volvo has added to the list of standard features for the new year. Now, you get adaptive LED headlights, wireless phone charging and front park assist as standard. Rear passengers gain two USB-C chargers, and the heated wipers are made available as part of the Climate Package. The T8 plug-in hybrid model is renamed as the XC90 Recharge, and it gets a new entry-level Inscription Express trim. The R-Design model gets a new glossy black grille design. Volvo’s 112-mph speed limiter goes into effect across the lineup this year. Lastly, Volvo has done some color and interior trim shuffling, but nothing major.

What are the XC90 interior and in-car technology like?

No matter the trim level, the 2021 Volvo XC90’s cabin is a lesson in minimalism. The vibe is different from any of the German or Japanese luxury machines. Where BMW and Mercedes dashes are festooned with design flourishes and obvious luxury, the XC90 is laid back and staid. Muted wood inlays grace the dash of luxury models, whereas metal inlays are used on sportier builds. You can get a dose of flash with the Inscription trim and its Orrefors Crystal shift knob, but even that piece pales in comparison to BMW’s gaudy glass-cut gear lever.

The XC90’s tech is a mixed bag, and the minimalist theme carries over to a fault. A 9-inch touchscreen comes standard as the centerpiece of the dash. It’s vertically-oriented and runs Volvo’s Sensus infotainment software. Volvo has improved its speed and performance in recent years, but it still hiccups on initial startup from time to time. All of your climate and seat controls are placed within the screen, so you’re left without any physical buttons there. A few audio playback buttons can be found below the screen, but it’s still a tech fiend’s paradise. The optional Bowers & Wilkins audio system is updated and even better for 2021, too. Volvo’s 12-inch digital instrument cluster comes standard, and it continues the minimalism theme with a simple layout and limited customization. As you’d expect in a big luxury crossover, this one can be loaded to the gills with desirable features like a head-up display and massaging seats.

The XC90 is the biggest Volvo, allowing for three rows of passengers to come along for the ride. Its length is similar to other mid-size crossovers like the BMW X5, Mercedes-Benz GLE, Acura MDX and all-new Genesis GV80. However, not only can you fit six or seven passengers in the XC90, there’s a very good chance that all those passengers will actually be comfortable. The third row is actually habitable for adults, which is rarity in luxury crossovers apart from bigger, pricier models like the BMW X7 and Mercedes-Benz GLS.

The XC90’s boxy shape is well-suited to cargo, though, and is similarly better than most competitors. That is particularly true with all rows raised, as our XC90 Luggage Test showed it capable of holding four medium suitcases behind the third row. You’ll be lucky to fit two in most competitors.

What are the XC90 fuel economy and performance specs?

Volvo offers a lot of choice to XC90 buyers, letting them choose between a few power outputs and a plug-in hybrid variant, too. The options include a T5, T6 and Recharge (formerly known as the T8).

Volvo’s T6 trim is equipped with a supercharged and turbocharged 2.0-liter four-cylinder. It makes 316 horsepower and 295 pound-feet of torque. All-wheel drive is standard on the T6. Fuel economy dips to 19 city, 28 highway and 22 combined.

The XC90 Recharge model uses the engine from the T6, but bolsters it with an electric motor on the rear axle powered by an 11.6 kWh battery pack — it operates as a rear-wheel-drive car when only using electric power. All in, it makes 400 horsepower and 472 pound-feet of torque combined. It’s rated for 18 miles of all-electric range when fully charged, and gets by with a 55 MPGe rating from the EPA. Despite being the fastest XC90, it’s also the most efficient once the battery is depleted with a 27 mpg combined rating.

A little 2.0-liter four-cylinder may not sound sufficient enough for a large vehicle like the XC90, but it actually has plenty of grunt to shove this crossover along with ease. The T5 is noticeably slower than the others, but the torque from the turbo is enough to keep up with traffic. Things get more exciting with the T6. Its supercharger helps fill in the lack of power on throttle tip-in with the T5. The Recharge is the fastest of the bunch, as power comes on strong right away with the help of the electric motor. Even with the rear axle getting power from this motor, there’s still enough power going forward to spin the front tires up and get torque steer.

Handling is nothing to get excited about, but it’s still plenty responsive for a vehicle of its stature. Both the BMW X5 and Mercedes-Benz GLE are more fun to drive fast. Volvo’s optional air suspension can stiffen and improve body control marginally, but it’ll never come close to matching the performance of the Germans.

The ride is plush when you opt for the smaller wheel sizes, but it can get uncomfortably jarring if you go for the optional 21-inch or 22-inch wheels. Just as a good luxury vehicle should be, the XC90 is quiet on the highway. Its Pilot Assist driving assist system tracks in the center of lanes well and makes highway driving just that much easier.

What more can I read about the XC90?

Managing Editor Greg Rasa owns a ’17 XC90 T5. He explains how much has changed over the years, plus the differences between the base turbo inline-four and the range-topping plug-in hybrid.

We drive the updated XC90 for the first time. Volvo massaged the styling, added tech and re-worked its lineup last year.

We take a deep dive into the interior of the 2020 Volvo XC90 T8 Inscription. Read this to see the inside of this crossover from every angle.

We see how much luggage fits behind its raised third-row seat.

Our staff takes a spin in the sporting middle child of Volvo’s XC90 lineup. Our tester was equipped with a Polestar Optimization, which increases power through a tune from the factory.

How much is the 2021 Volvo XC90 price and what features are available?

A base T5 in Momentum trim starts at $49,995. It comes standard with LED headlights and taillights, 19-inch alloy wheels, leatherette seats (powered in front), four-zone climate control, auto-dimming mirrors all around and a host of driver assistance systems. Stepping up to either the R-Design or Inscription trim brings a large number of other features along for the ride. You can find a full breakdown of features, specs and local pricing for the XC90 here on Autoblog.

The above prices are for seven-passenger versions, but there is a six-passenger configuration with second row captain’s chairs available for the T6 and Recharge trims that costs a little bit more.

What are the XC90 safety ratings and driver assistance features?

Volvo and its reputation for safety precedes itself. So of course, a vast number of driver assistance systems are made standard on the XC90. These include lane keeping assist, front and rear collision warning, automatic emergency braking, and blind-spot monitoring with rear cross-traffic alert/braking. A smart and capable lane-centering system with adaptive cruise control called Pilot Assist is also standard equipment.

The 2020 Volvo XC90 won an IIHS Top Safety Pick+ award with superb ratings all around — 2021 ratings aren’t available yet. Additionally, the NHTSA rated the XC90 an overall five stars for crash test safety. We can safely say the XC90 is a safe vehicle, given that two independent crash testing agencies both gave it the highest possible marks in testing.